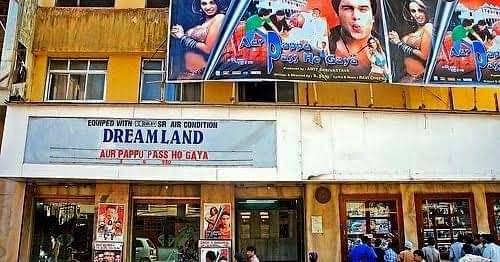 Located at Grant Road, Dreamland started as Krishna in 1919 during the silent film period. When the talkie era started, Krishna Talkies became one of the prime cinema halls of old Bombay. It was the preferred hall of V Shantaram’s Prabhat Studios and Calcutta’s New Theatre Studios. In fact, V Shantaram’s films were bilingual so the Marathi versions would release at Majestic or Central cinema in Girgaon and the Hindi versions would invariably release at his favourite Krishna. The theatre has the distinction of screening India’s first silver jubilee film – Amrit Manthan (1934) which ran here for 29 weeks. The first Telugu talkie film Bhakta Prahlada (1932) was also released at Krishna.

With the opening of new theatres such as Liberty in 1949 and refurbishment of nearby West End to Naaz Cinema and Pathe to Swastik, old theatres such as Majestic and Krishna lost their importance among the distributors in 1950’s and ’60’s. 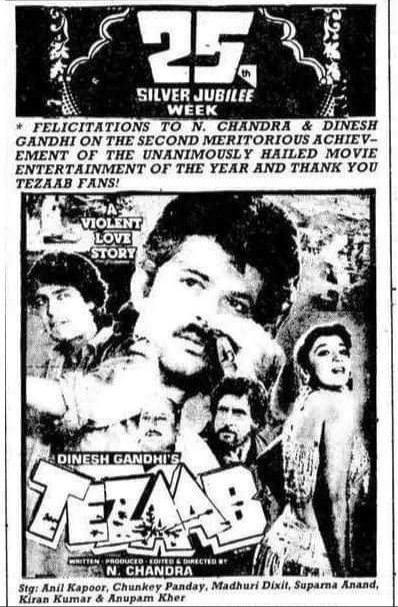 The theatre had a fruitful association with director N. Chandra whose Pratighaat (1987) as well as Tezaab (1988) were smash hits here. The hard hitting and violent Pratighaat featuring Sujata Mehta celebrated a silver jubilee in matinee shows while the more commercial Tezaab launching Madhuri Dixit in mainstream Bollywood completed a golden jubilee run at Dreamland.

Interestingly, the theatre marked the Hindi debut of two South super stars – Chiranjeevi with Pratibandh (1990) and Venkatesh with Anari (1993) – both were super hits at Dreamland.

In the ’90s, the musical blockbuster Saajan (1991) ran housefull for multiple weeks at Dreamland. Shah Rukh Khan’s anti hero act in Baazigar (1993) was much appreciated here. Later, the crowd welcomed Nana Patekar’s acidic dialogues in Krantiveer (1994) with ceetis and claps at this theatre. Ajay Devgn’s Dilwale (1994) was its another highly successful release of that time.

With the advent of multiplexes in the new millennium, many single screens of neighborhood Grant Road area shut down. The iconic Minerva, Novelty, Naaz, Swastik, Ganga- Jamuna were some of the casualties. Dreamland braved the trend but it needed a facelift and renovation. There were hardly any silver jubilee hits for the theatre in this era except for Rang De Basanti (2006) and an obscure movie called Rafta Rafta: The Speed (2006) which trailed its way to a jubilee in matinee shows. Finally, Dreamland closed temporarily in March 2009 only to re-open in a new avatar.

Around that time, Pune based E Square cinemas acquired control of the freshly renovated Dreamland and the cinema was rechristened Dreamland E Square and opened with Imtiaz Ali’s Love Aaj Kal in July 2009. The theatre screened all new Hindi releases and was one of the only single screen cinema in that area to do so as all its neighbours had either shut down or got relegated to B or C grade cinemas. Dreamland priced its tickets at nearly half the price of a multiplex to pull in the audience but still found it difficult to fill up the seats. Nevertheless, the theatre survived till the Corona induced lockdown of March 2020. 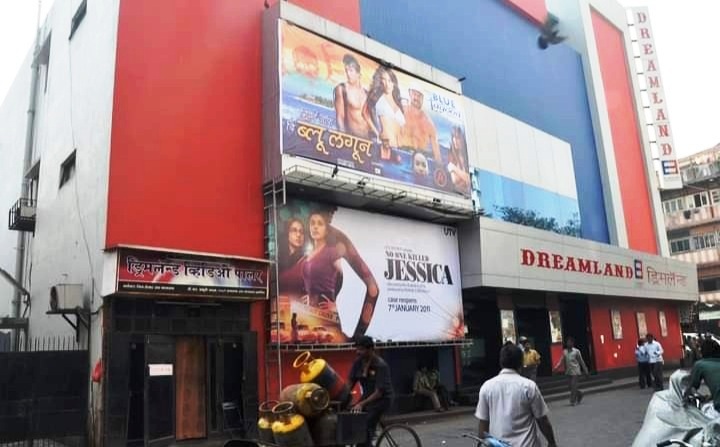