While most cities in India have Drive in theatres, the financial capital Mumbai is still gearing up for its own Drive in cinema at Maker Maxity BKC. The Maker group is developing this project with a plan for a large hotel and a mall apart from the drive-in cinema. Reportedly, the theatre is expected to accommodate 250 cars and will charge Rs.1000 per vehicle as per its last update.

Having said that, Mumbai had its own Drive in cinema not too long ago at this very place in Bandra where the new theatre is being planned. It was called Drive in or Open Air theatre in those days. This was much before Bandra Kurla Complex (BKC) was developed in to an elite commercial space. The earlier Drive in theatre was a huge space right in the middle of then marshy Bandra east area with Mahim creek on one side and slums at the other end.

This gigantic Drive in screen could accommodate around eight hundred cars and also had an amphitheatre like facility which could seat another thousand patrons. The theatre was managed by the Indian Film Combine Limited (IFCL) – a company owned by two Gujarati businessmen who had similar Drive in properties in Ahmedabad as well as in Africa. The plot itself was acquired on lease from the State after a lot of bureaucratic delays. The bhumi poojan was done as early as 1970 while Drive in ran two shows per day – 7 pm and 10 pm. It screened Hindi re-runs mostly with rare instance of Hollywood films as well as the occasional Marathi blockbuster like Mahesh Kothare’s Thartharat (1989). The movie schedule for next week would be prominently displayed at entrance of the adjoining Kalanagar before start of the week itself.

Since the concept of Drive in cinema was totally foreign for the ’80s India when not many people owned cars, the theatre never displayed Housefull boards nor played any movie for more than one week. Probably the only film which pulled in full shows for continuous two weeks here was Amitabh Bachchan’s blockbuster Muqaddar Ka Sikandar (1978).

Infact, all Amitabh Bachchan films of ’70s and ’80s were the major draw at this cinema and the Fiat, Ambassador and then newly launched Maruti 800 cars would line up to watch these popular re-runs. In one of the much covered news item that time, the theatre infamously chopped off two reels of Bachchan’s super hit Namak Halaal (1982) in order to start their next show on time which angered the patrons and lead to chaos at the cinema.

Apart from such case of missing reels, the blood thirsty mosquitoes and the unbearable stench from Mahim creek was another sore factor for the patrons which significantly affected the cinema’s collections. Drive in attained further notoriety in early ’80s when a rape took place in its premise and the theatre was shut for quite some time after this unfortunate incident. 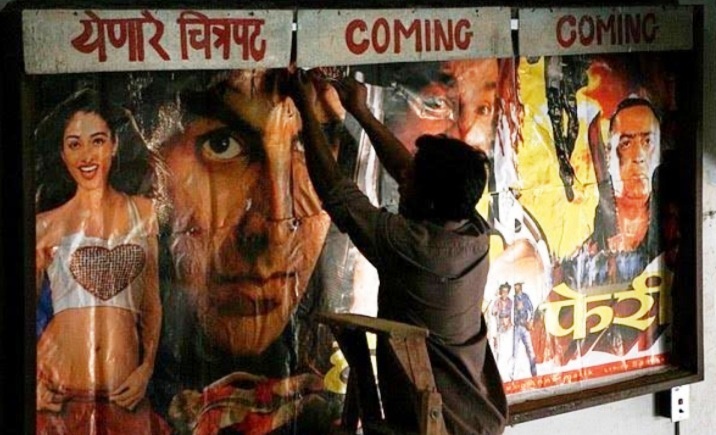 Re-opening later, Drive in continued operations till 2003. But in its sunset years, the theatre was largely avoided as it became ill maintained with damaged non- functional speakers and wasn’t considered safe for family. The gigantic screen was visible to its nearby residents who would line up on their terraces to just view the film without any sound. The screen visibility extended right up to the railway line from Bandra to Mahim and commuters like me played “Guess the movie” game as the train passed by.

Notably, Drive in cinema formed part of an action scene in Mithun Chakraborty’s hit film Ladaai (1989). Later, the movie also played in a re-run at this very cinema.

Here’s hoping the new Drive in (whenever it commences business) will learn from its predecessor’s shortcomings and offer a world class experience to its audience. After all, they are coming at the right time and right place. Something the earlier Drive in cinema wasn’t fortunate enough to be in!!