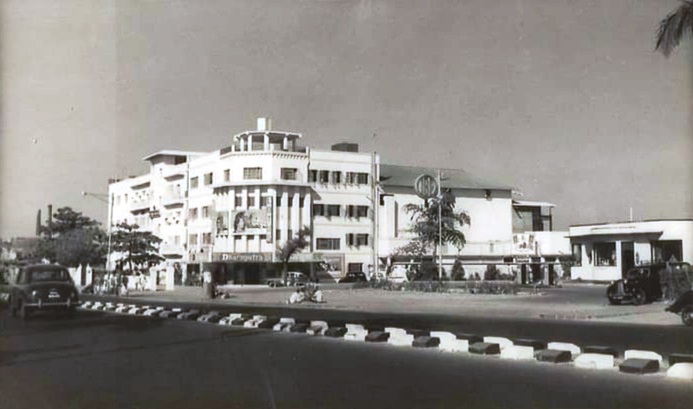 Circa 1997 when I would travel to my office in town, the BEST bus conductor would invariably call out this name for a stop near Nehru Planetarium. I always wondered what this Lotus was?!! It was much later I learnt that it was a popular cinema hall in the ’60s and ’70s with its own share of glory. This article is a result of our research on this theatre which is only reduced to a bus stop reference now.

Lotus Cinema, which was situated at the very busy Worli junction, was one of the prime halls of its time. Right behind the cinema, there was Roussel Pharma Company and its exit was close to the Nehru Planetarium. The theatre was surrounded by the picturesque waterfront of Haji Ali with the prestigious Willingdon Club and Race Course at a close distance.

Lotus had a reasonably large capacity of eight hundred seats with lower stall, upper stall, balcony and a box with a wooden staircase leading to the balcony. The Box seats were just behind the upper stall.

Inaugurated in 1957, the theatre was built by Lotus Foundation Trust set by Manubhai Subehdar which still has its office in Liberty Cinema building at Marine Lines. The first film to be screened here was Dev Anand and Nutan starrer Paying Guest which ran for twenty five weeks in daily four shows.

Like Gaiety Galaxy (G7 Bandra) today, Lotus was considered the barometer of a film’s performance in those days as movie reviews would be out from this cinema after the first show deciding its box office fate. Also, this was one of the rare air conditioned cinema halls apart from the elite few in South Bombay.

Later, Lotus was run by Shantaram Bhatt and his son Nootan Bhatt right till its closure. The Bhatt’s owned multiple cinema halls in Mumbai like Nandi and Neptune in Bandra and Natraj and Vijay in Chembur. 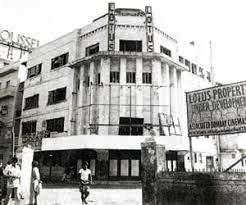 Though the theatre attracted quality crowd, tickets would be easily available at the box office counter particularly on weekdays. The evening and night shows would attract more audience though. The tasty samosas served in its canteen had gained a lot of popularity amongst its patrons. Lotus attracted both the office crowd from the neighbouring Shivsagar Estate as well as college students from Lala Lajpatrai, Hinduja and Wilson College close by.

Lotus was patronised by many Bollywood celebrities as well. Noted actress Mumtaz and her family, who stayed in that area, were regular at this theatre. Sometime in the ’60s, Tansen (1943) was re-released at Lotus Cinema and the Mangeshkar sisters had come to watch the film as Lata Mangeshkar was a huge fan of K.L. Saigal. Love in Simla (1960) was premiered at Lotus and the lead debutants Joy Mukherjee and Sadhana were present for the special screening. Later, Sadhana was said to visit the theatre to watch audience reactions to her film.

The first family of Bollywood – Kapoors- also marked their presence at this cinema. Shashi Kapoor attended the screening of Mohabbat Isko Kahete Hain (1965) and Pyar Kiye Jaa (1966). Randhir Kapoor came to gauge the audience reaction during release of his younger brother Rishi Kapoor’s debut film Bobby (1973) which was the biggest hit at this cinema. Earlier, during Raj Kapoor’s ambitious venture Mera Naam Joker (1970), the theatre had hiked up its ticket price from Rs. 1.60 to Rs. 2.10 in anticipation.

Occasionally, the theatre would screen Bengali films like Kabuliwala (1957) and Satyajit Ray’s Apur Sansar (1959) in matinee shows. There would be Hollywood re-runs as well in its matinee shows like The Reincarnation of Peter Proud (1975) best remembered to be screened here. The film was later adapted by Subhash Ghai as Karz (1980).

In 1972, certain students of Bhavan’s college arranged a fund raiser show of Manoj Kumar’s Shor at Lotus. They were given the film on the condition that tickets would be priced at normal rate. The students met the theatre owner regarding the seats and he generously gave them the entire show free without charging anything. An act of generosity indeed!!

During the early ’70s, many new cinema halls came up across Mumbai. One big competitor to Lotus arrived in form of the triplex- Satyam Sundaram Sachinam even as its single screen peer Kumkum underwent a makeover to become Geeta Cinema. Gradually, the audience started visiting these new cinemas and Lotus faced an imminent downfall. It shut down in 1979.

The theatre was demolished in early ’80s making way for a residential complex which is known as Lotus Court (next to Copper Chimney). Very few know that the Lotus Court also houses a small theatre to comply with the Government regulations but due to unknown reason, it never commenced operations.