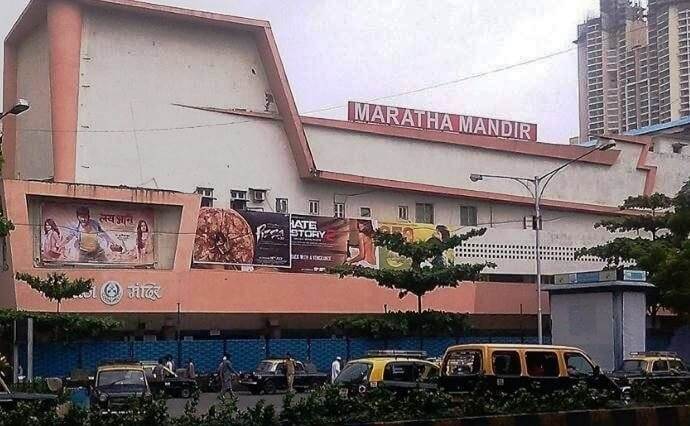 Situated opposite the ever crowded Mumbai Central station, Maratha Mandir Cinema is closely associated with two biggest blockbusters of Hindi Cinema – K. Asif’s Mughal-E-Azam (1960) and Yash Chopra’s Dilwale Dulhania Le Jayenge (1995). Mughal-E-Azam ran in regular shows here for three consecutive years creating a new record. Since 1995, Dilwale Dulhania Le Jayenge (DDLJ) has been running in matinee show at Maratha Mandir which is an unparalleled record of twenty five consecutive years. I doubt any other film will ever be able to break it in future.

Coming first to Mughal-E-Azam’s glory, its grand premiere at this theatre is still fondly remembered by everyone. The one thousand one hundred seater Maratha Mandir was decked up to resemble a Mughal palace and huge cut outs of the film’s key characters made it an awe inducing sight. The premiere show itself attracted an unprecedented crowd who clapped and cheered loudly as the film’s prints arrived atop an elephant to the melodious sound of bugle and shehnaai. The entire film industry was in attendance to watch the magnum opus on celluloid.

Upon its release, Mughal-E-Azam fetched an incredible initial with tickets sold out in advance for its first three weeks. Public used to queue up here for two to three days to get their tickets – something unimaginable even that time. A ticket costing Rs.2 was getting sold in black for a staggering Rs.100. Phew!! Mughal-E-Azam ran for three consecutive years (150 weeks) at Maratha Mandir breaking the record of two years run previously held by Ashok Kumar’s Kismet (1943) at Roxy Cinema. 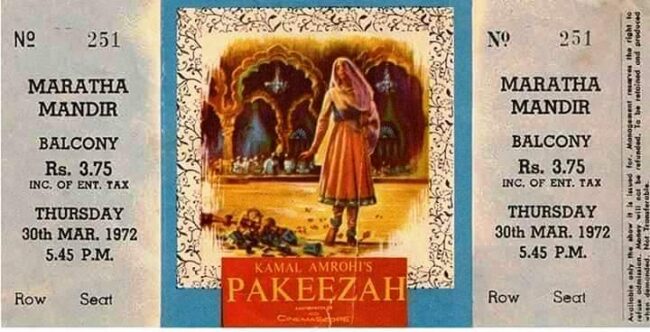 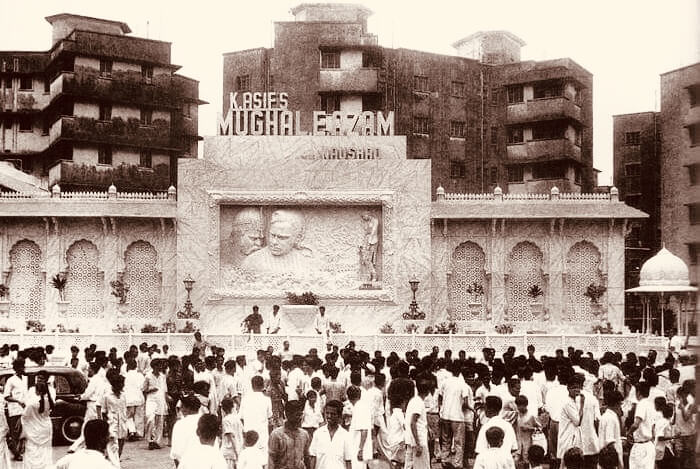 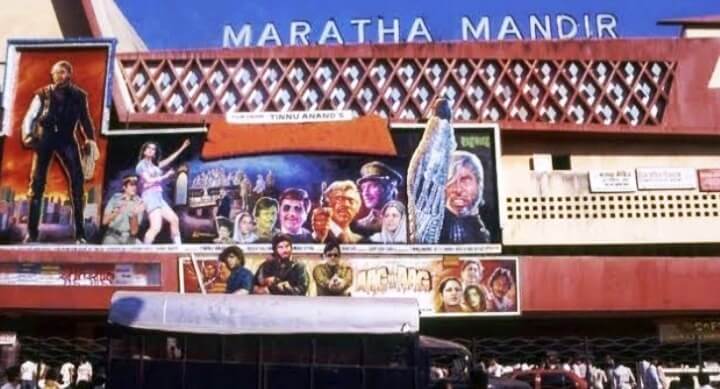 In early seventies, there was a management change and Manoj Desai, its present Executive Director assumed charge. Maratha Mandir continued being the main theatre for big ticket Bollywood films releasing one super hit after another. Notably, Kamal Amrohi’s masterpiece Pakeezah (1972) premiered to a tepid response initially but after its lead actor Meena Kumari’s untimely death, the film picked up to become a jubilee hit at this theatre.

In 1980, Maratha Mandir upgraded to 70MM stereophonic facility to premiere Ravi Chopra’s eagerly awaited ‘The Burning Train’ (1980) but unfortunately, the film was dismissed as a “turning brain” by the audience and the theatre faced losses. Fortunately, it could recoup the 70MM investment by showing Ramesh Sippy’s all time blockbuster Sholay (1975) in a rerun and later with the new 70MM releases – Sippy’s Saagar (1985) and Subhash Ghai’s Karma (1986) – both turned successful here.

Maratha Mandir experienced the same audience euphoria like Mughal-E-Azam when Amitabh Bachchan’s Shahenshah premiered here in 1988. The highly anticipated and equally controversial film attracted such advance booking that police had to be called in to control the rampaging crowd. Manoj Desai produced another Bachchan blockbuster Khuda Gawah in 1992 and obviously, it was released to a great fanfare at his own Maratha Mandir cinema. Even now, the theatre had not achieved the ultimate glory which came its way after DDLJ released here in matinee shows after a brief stint at New Excelsior (Mumbai) in regular three shows.

Running continuously for twenty five years if we discount the Corona lockdown period in 2020 when all theatres across India shut down, the film continues to attract audience at this cinema. Manoj Desai, its Executive Director who also manages Gaiety Galaxy (G7) cinema at Bandra, believes there are multiple reasons for DDLJ’s dream run at Maratha Mandir:
First and foremost, its close proximity to Mumbai Central station which attracts the long distance

transit travelers who prefer to sit comfortably in this air-conditioned theatre than sweat it out in the station’s waiting room. After all, the ticket price for this matinee show is just Rs. 25 for Balcony, Rs. 20 for Dress Circle and Rs. 15 for Stalls – believe me, you won’t get such low rate in any air-conditioned cinema across India.

Second, the repeat audience specially from the neighbouring red light area who find it worthwhile to get a movie watching experience in a premium theatre at such cheap rate. Interestingly, Maratha Mandir allows sex workers and eunuchs from that area to get tickets without standing in queue.

And last but not the least, the overall love for DDLJ especially by Shah Rukh Khan (SRK) and Kajol fans. Desai knows certain patrons who have seen the film more than two hundred times at his theatre. Wow!! 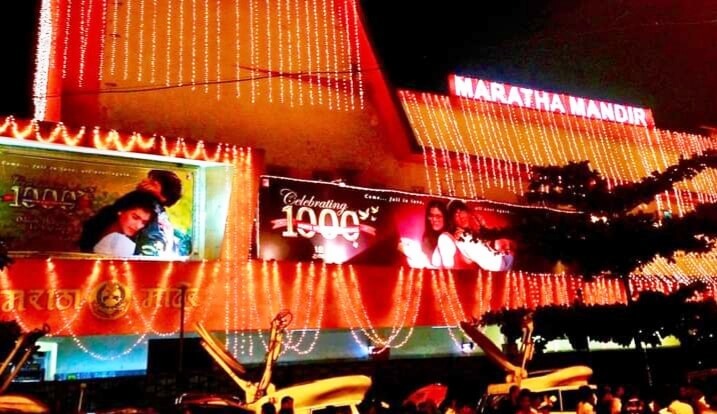 When DDLJ completed a thousand-week run in 2014, the entire cinema was decked up like a wedding pandal as a mark of celebration. SRK and Kajol attended this housefull show and shared their thoughts on this great achievement. Manoj Desai was planning a similar event for its silver jubilee anniversary celebration but was advised against it in wake of the ongoing Covid 19 pandemic.

Nevertheless, the show still goes on at Maratha Mandir. The theatre was amongst the few single screens in Mumbai to open post Corona pandemic. It is now waiting for the next big blockbuster to take its legacy forward…fingers crossed!!