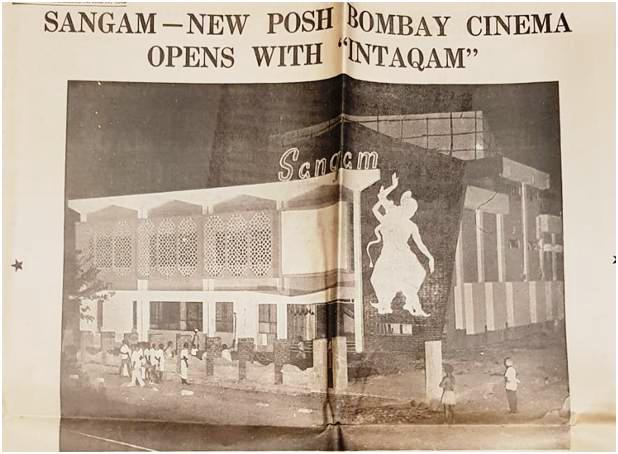 Commencing its operations in April 1969 with R.K. Nayyar’s Intaqam, Sangam was situated at Andheri’s JB Nagar area on Andheri-Kurla road. The theatre was owned by industrialist J.R. Tandon and his younger brother B.R. Tandon. The theatre itself, owes its name to the legendary Raj Kapoor’s blockbuster hit Sangam (1964) as the Tandons were huge fans of the showman who visited their theatre regularly.

Sangam boasted of the widest screen in that area with a one thousand one hundred seating capacity. But its most unique aspect was the escalator inside the premises which would lead the patrons to the balcony from stalls. A first for a Mumbai theatre!!

The evergreen actor- director Dev Anand had inaugurated the cinema in 1969. The maverick actor himself started the projector for the first screening. He praised the owners for building such a magnificent cinema hall in Andheri area and welcomed the bold decision of J.R. Tandon and B.R. Tandon. 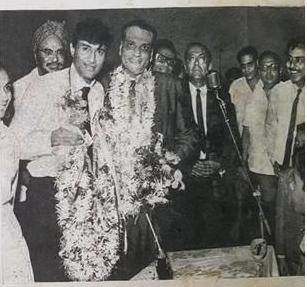 It may surprise you that JB Nagar was not the prime location that it is today and the entire place hardly had any avenues of entertainment or cinema halls. Janakraj Tandon took a risk by investing in a cinema here. The plot was purchased from a Parsi owner and was situated adjacent to Tandon’s own home where they had a farm as well. The risk paid off well and Sangam soon became the most preferred cinema in Andheri with the escalator being a special attraction for the audience who would drive down here from far away to catch the latest movie. In those days, many patrons didn’t know how to use the escalator and it was a matter of time before the machine was shut permanently after a minor accident was reported.

As years passed, Sangam actually saw JB Nagar develop in to a bustling area of prime suburbs with hotels and offices springing up around it. Its crowd used to be a mix of middle class as well as elite who would come dressed in suits and blazers as watching a film in those times was nothing short of a royal event. 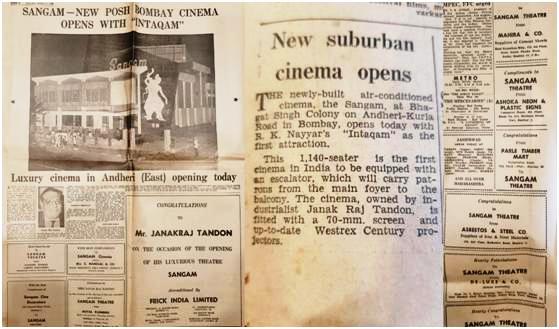 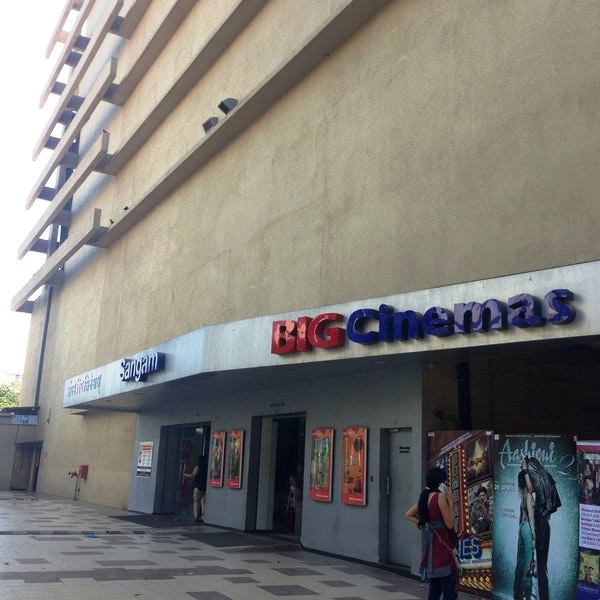 Sangam screened many big hits of its time like Sholay (1975), Don (1978), Trishul (1978), Maine Pyar Kiya (1989), Hum Aapke Hain Koun (1994) and Gadar Ek Prem Katha (2001). Particularly, Sholay and Maine Pyar Kiya celebrated silver jubilee (25 weeks) run at this cinema. On Sunday mornings, there would be special screening of Punjabi films for the residents of nearby Charat Singh colony and they would gather in large numbers to catch their regional cinema.

By the ‘90s, many theatres faced a pinch due to heavy taxes and rampant video piracy but Sangam managed to survive even that difficult phase though the earlier jubilee runs became relatively rare and except for Hum Aapke Hain Koun (1994) which ran for months, the films would change every week.

With the new millennium came the multiplex era and the single screens suffered greatly as the multiplexes provided better facilities and also benefitted from the tax relief given to them by the Government. Around the same time, the Tandons decided to part ways from Sangam and the last film released here before the management change was Gadar Ek Prem Katha (2001) which was a huge hit.

Sangam was now run by a different owner but somehow, things started deteriorating for the cinema and it lost its original glory and sheen. Due to non-maintenance, the crowd quality fell drastically and the cinema stooped to screening re-runs and new films exhausting their first run. The cinema, in a dilapidated state, shut down around 2005 and was soon demolished.

In its new avatar, Reliance Mediaworks acquired the old cinema, revamped it completely in to a premium multiplex and renamed it Sangam Big Cinemas which opened in July 2010 with the much awaited film -Once Upon A Time In Mumbaai. The new multiplex had four screens and total seating capacity of close to one thousand three hundred. There was also a big lounge with pantry, gift shops as well as a gaming zone. There were offices in the same premise with a Pizza Hut outlet on the ground floor.

Within three weeks after opening the multiplex, it started promoting pop art on its décor which was the first cinema to take this move. The decors were done internally and externally with inspiration taken from Hollywood and Bollywood pop art from box office window up to the audi. This new experiment received a favourable response from the audience.

In 2016, Big Cinemas was taken over by Carnival cinemas and the multiplex was rechristened Sangam Carnival Cinemas.

With Carnival cinemas coming on board, Sangam became even more elite and luxurious with a huge red lounge and a large food court selling the best snacks which are sometimes more expensive than the movie ticket. Over the years, Sangam has transformed in to one of the costliest suburban cinema and filmstars like Ayushmann Khurrana have visited the plex in recent times to gauge the audience reaction to his hit film Andhadhun (2018). In a rare instance, Konkani film ‘Nachom-ia Kumpasar’ (2014) based on life of famous Goan singer Lorna was released here in a special show which was attended by its lead actor Palomi Ghosh who interacted with the enthusiastic crowd.

Before the Covid pandemic struck in March 2020, there were two big hits playing at Sangam Carnival – Marathi film Dhurala and the Hindi blockbuster Tanhaji: The Unsung Warrior which was drawing packed houses.

The erstwhile Sangam survives as multiplex today but its original legacy is many notches above the current multiplex era. 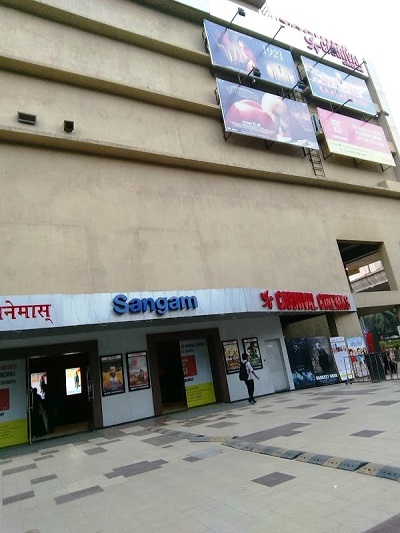